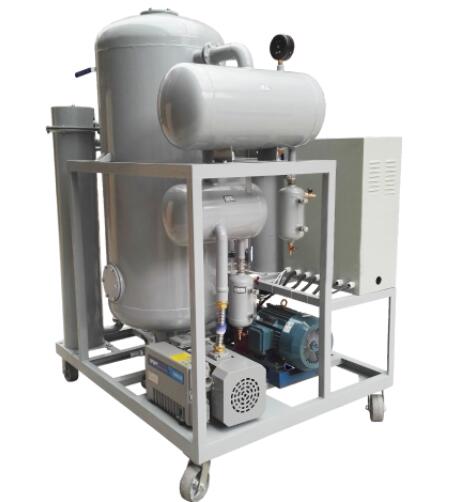 1. Possible harm of water in turbine oil in power plants

There are two possible forms of water in turbine oil: dissolved water and free water. Dissolved water is water evenly distributed in oil. Under the operating conditions of the power plant, the maximum concentration of water dissolved in the oil is about 150mg/L (the specific value is related to the composition of the oil, temperature, additives, etc.). Free water is water in oil in the form of tiny beads of water, which have small particle sizes and are sometimes difficult to separate from the oil due to impurities. Lubricants containing free water appear turbid, while lubricants containing only dissolved water appear transparent. Because of the strong mixing in the oil tank system of the power plant turbine, only the water exceeding the solubility will exist in the form of free water. In other words, if there is free water in the oil, the appearance is turbid and the water content is above 150mg/L.

The harm of more water in turbine oil is mainly manifested in the following aspects:

(1) oil emulsification may occur, so that the adhesion of the lubricating oil is not good, the oil adhesion to the friction surface is not enough, the oil film is damaged, the rotor shaft journal may have dry friction with the bearing bush, so that the bearing bush is burned, the unit vibrates strongly, and even the machine is destroyed.

(3) the water turbine oil, will make the oil system of the carbon steel pipe, parts of the rust, resulting in jam, reduce the sensitivity of the action, when serious, will also cause the adjustment, the security device refused to move, resulting in the occurrence of overspeed accidents.

(4) the corrosion products produced by the water-bearing turbine oil are an important source of particulate matter in the oil. The water content of the turbine oil will make the granularity of the oil easily exceed the standard. The filter element of the oil filter is changed frequently and the operation and maintenance work is large.

In order to reduce the harm of water in turbine oil, the GBT 7596-2008 quality standard for turbine oil in power plant operation issued by China stipulates that the water content in lubricating oil should be less than 100mg/L.

When water leakage is difficult to change, it is an effective way to remove the water from the turbine oil system by proper dewatering equipment.

At present, there are three technologies suitable for the dehydration of turbine oil system: coalescing separation, centrifugal separation and vacuum dehydration.

The dehydration principle of coalescing separation is to take advantage of the difference in surface tension between oil and water to separate small water beads into large ones. Because the concentration of lubricating oil can dissolve water is about 150mg/L (the specific value is related to oil composition, temperature, additives, etc.), therefore, the coalescent separation oil filter usually can only treat water to 180mg/L or so, it is impossible to reduce the national standard value of 100mg/L below.

The advantages of the coalescing and separating oil filter are simple structure, no heating is needed in the dehydration, when the free water content is high, the dehydration speed is fast, the operation is convenient, the reliability is high, so it is widely used in the electric power industry.

The centrifugal oil filter is used to accelerate the sedimentation of water droplets under the condition of high rotating speed by using the difference of specific gravity between water droplets and oil. Because the formation of high speed conditions requires a large power, and easy to produce vibration, so the general centrifuge is also equipped with auxiliary heating, in order to improve the temperature of the oil, reduce the oil viscosity, so the operating power of the centrifugal oil filter is relatively large.

At present, vacuum oil filter is the only technology that can make the moisture content of a small amount of leaking lubricating oil system reach the standard.