Do you know the aging of nitriding furnace and its countermeasures?

The aging of furnace cylinder refers to the phenomenon that the ammonia decomposition rate in the furnace increases obviously after the nitriding tank is used for a long time, leading to the loss of some nitriding ability. Its essence is that the tank wall (including the ammonia tube in the furnace), due to the catalytic effect of ammonia decomposition rate enhanced, increased the consumption of ammonia gas, and may even make the nitrification out of control, nitrification products do not meet the technical requirements. 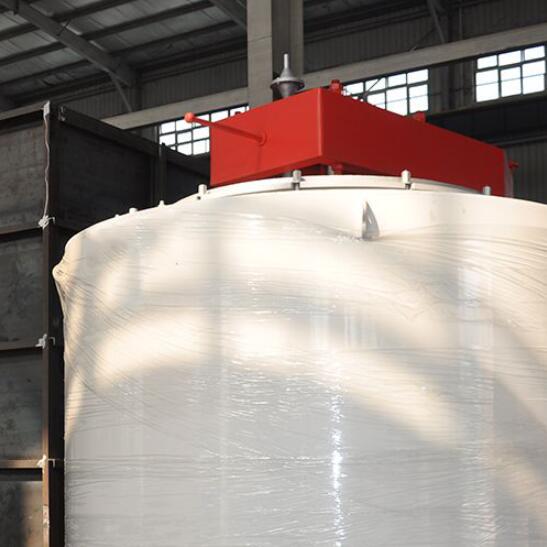 General domestic nitride tank and ammonia pipe are made of 18-8TI stainless steel. The passivation film on the surface of the new nitride tank will prevent nitrogen infiltration, but due to the low nickel content in the 18-8 Ti, there will still be infiltration (infiltration is generally slow and uneven).

With the increase of nitriding furnace times and nitriding time, the inner wall is nitriding gradually. Under the same process, temperature, time and loading amount, the decomposition rate of ammonia increases gradually. The nitrogen must be denitrified to ensure the required nitrogen potential NP for the process.

The basic rule of furnace age is that the flow rate in furnace increases from slow speed to fast speed to NP stage which cannot be controlled in a certain time. The attached figure is based on the actual production data of a certain furnace, the loading capacity of the furnace is greatly different from that specified by the equipment.

Therefore, the influence of workpiece on ammonia decomposition rate is the main influencing factor, and the hearth suction [N] gradually slows down, reflecting the actual situation.

As is known to all, the lower the ammonia decomposition rate, the higher the NP, the stronger the nitridation ability. It must be noted, however, that the nitrogen atoms produced by the breakdown of ammonia molecules are very active, and if they are not absorbed, they bind to stable nitrogen molecules at a very rapid rate, which is not absorbed by steel surfaces.

It is also believed that the higher the decomposition rate of ammonia, the higher the concentration of hydrogen in the furnace, the absorption of nitrogen atoms will also be affected. And, of course, if the atmosphere is full of ammonia, which is the rate of decomposition is zero, and no nitrogen atoms are produced, then of course there is no nitrogen.

Therefore, a low reasonable decomposition rate in production will inevitably lead to a sharp increase in ammonia consumption, and the impact of air flow on the workpiece will lead to imbalance, uncontrollable temperature, resulting in uneven permeation layer and deformation of the workpiece, and even some people will cause nitration control difficulties.

The decomposition rate and NP are also controlled by the composite layer. Under the reasonable NP condition, it is beneficial to accelerate the nitriding speed.